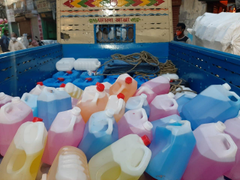 Kolkata (West Bengal) [India], Aug 2 (ANI): Round 1,400 litres of purported spurious sanitizer from two outlets in Kolkata have been seized and two individuals have been arrested on this connection, Kolkata Police stated on Saturday.